I recently sneaked into one of the most surprising buildings in all Shanghai: Hamilton House. Hamilton House was erected in 1933 by architect office Palmer and Turner for real estate tycoon Victor Sassoon. Victor Sassoon was the heir of David Sassoon, a Sefardim Jewish who had fled Bagdad in 1829 after Dawud Pasha came to power. He settled in Bombay, today's Mumbai, where he created a business empire with help of other Baghdadi Jews. Although he never spoke English, he was made a British citizen to reward his unique contribution (hospitals. library, cotton mills, harbour facilities...). So when his grandson got to Shanghai in the early 1920s, he also tried to pursue a similar dream by firmly stamping his print into the urban landscape. As most of Victor Sassoon properties in Shanghai, Hamilton House is designed with a business purpose as well as a will of impress his contemporaries. It is actually built in the same project with its twin sister, the Metropole Hotel on the other side of Fuzhou Road, which offered an easy accommodation for visitors of the offices or the lavish apartments in Hamilton House. This is the same practical idea which led Sassoon to build the Cathay Mansion on today's Maoming Road to propose luxury rooms to the guests of the opposite Cercle Sportif Francais in 1926. Same combination in 1928 in the Sassoon House on the Bund (Peace Hotel today) between David Sassoon & Co headquarters and the luxury hotel that we can still visit today. Hamilton House was definitely designed as a strong symbol of modernity. As they used for the first time aeroconcrete, a light type of bricks made of coal ashes from the power plants located in Henan province, the designers could finish the building in a very short timeframe and cope with the issue of soft ground of Shanghai to support such a massive construction. A smart shape including arches and balconies made it also possible to reach the actual height without adding too much weight to the structure. If you guys saw the film Metropolis by Fritz Lang, you will probably recognize the skyline of the futurist city imagined by the German Jewish director. Fritz Lang was actually a strong admirer of the Art Deco style, which inspired him for the making of his movie. Let us assume Palmer and Turner architects saw the movie in the first place before they built, this time for real, Hamilton House! Interesting enough, the crossroad of Fuzhou Road and Jiangxi Road is designed symmetrically. On the other side of Jiangxi Road, former Commercial Bank of China, by architects Davies, Brooke & Gran, complete the circle. Opposite to Hamilton House is the former Shanghai Municipal Council building, which should have initially been crowned by an Italian style campanile, like the one on San Marco Square in Venice. This plan was abandoned, leaving space to the only megalomania of Victor Sassoon! No surprise that the very modernist Emily Hahn chose to stay near the crossroad on Jiangxi Road to live her (for that time) scandalous love story with Chinese poet Shao Xunmei.

Village life on the roofs Like in most of Shanghai, luxury apartments of the 1930s have been turned later into more humble dwellings, being split between a far larger number of occupants. Although there were many immigrants and refugees in the 1920s and 1930s in Shanghai, western style apartments were only used by Chinese people after the communist takeover of 1949. This was the result of the industrialization of Shanghai by factories in the city and the heavy taxation burden imposed by Beijing. As there was no budget for new constructions, the loads of peasants who rushed into the city to work in the newly created factories had to pack into existing houses. This phenomenon was emphasized during the Cultural Revolution era when model workers were given apartments previously occupied by the so-called "bourgeois" type. These occupants are still paying rents as cheap as 20 yuans (3 US Dollar) a month today! No wonder that, when I visited the place, it was crowded by thousands of people. It reminded me my of Embankment Building, another former Sassoon property along the Suzhou River which long "S" shape (standing for Sassoon) corridors are also full of people, with even hairdresser and grocery shop! This time, the exotic balconies and terraces of Hamilton House exceeded all my expectations. When reaching the top floor, I had the surprise to see a lady hanging clothes on the castle-type mezzanines. Then on the terraces overlooking the Huangpu River and the Bund Custom House, I found an amazing display of plants, aquariums for goldfishes and pigeons cages. Such a countryside atmosphere right in the middle of Shanghai! 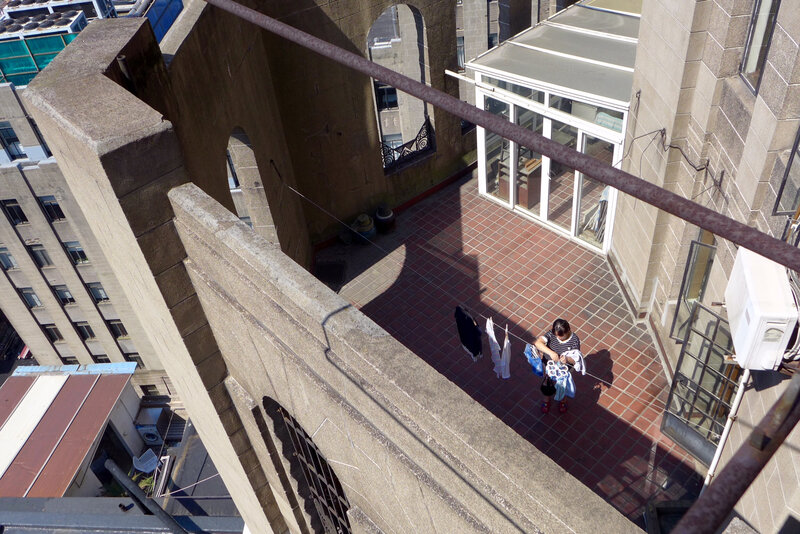 The most unexpected discovery was a small shrine dedicated to Chairman Mao. With so many low rent payers, I can understand that some still find nice sides in one of the most troubled and violent periods of Chinese history! When strolling in Old Shanghai and even in the French Concession, inscriptions dating from the Cultural Revolution era can still be spotted. I could actually never figure out if the red paint used at this period was so good that it lasted till now or if people did not dare to scrap off slogans mentionning Mao Zedong. May be both explanations are valid. However, this kind of tribute to Mao is still common in Chinese villages.

Inside the building, apart from the three first floors occupied by government offices (but not only as there is a tattoo shop on the first floor), the whole space is filled with people. Interesting point about Hamilton House is that its light structure gives a lot of light. I particularly appreciated the top corridors connecting the different wings of the building, which give the impression of walking in a aerial village. For Art Deco lovers, delicate geometric details can be found at almost every corner of the house, staircases, balustrades or ceilings. These decorations use a combination of black and yellow colors, sometimes separated by a light copper joint. So, if like me, you dare to enter this incredible building (the best is to take the elevator to the top floor without a word or look for the security guard, just as if you were coming home or visiting a friend), I am sure you will appreciate this unique mix of past and present in one of the most beautiful apartment house of Shanghai.