Art Deco is a word coming from the 1925 Paris Salon des Arts Decoratifs. This architecture trend is deeply related to the Shanghai landscape where Western influencies met with Asian culture. This style describes a way of life too, reflecting 1920s eagerness for modernity, speed and lightness. As WWI was over, fashion designers, artists as well as architects looked for a brand new way of shaping daily life of people. As Shanghai was a the midth of an economic boom, it immediately adopted the new wave as a strong symbol of its ambitions

Although it is difficult to pick a choice between the many buildings still standing in Shanghai showing Art Deco features, I tried to make a selection to help short term visitors in the city. The huge variety of the constructions in the "Paris of the East" include from early-stage Art Deco like in the Cercle Sportif Français to Modern Style, used for the Green House by Le Hudec on Tongren Road. My good friend Hugues Martin even thinks there is a last trend called "Frankenstein Art Deco", represented by Communist era buildings which designers had been earlier influenced by Western Art Deco from the 1930s 1940s! So you can make your own choice!

N°1 Peace Hotel, the most luxurious one

Built in 1928 for magnate Victor Sassoon, the materials used for the former "Sassoon House" include marble and cristal glass. The interior decoration is particularly sophisticated like for instance on the 8th floor ballroom, leading experts to rank the building in the top list of the world Art Deco gems. I also like the Bund galery which used to be the hotel entrance, for its wonderful geometric shapes. One says that the ego of the proprietary was such that he added a roof extension when nearby Bank of China was finished to remain the highest building on the Bund!

The 1926 Cercle Sportif Français, which is used by the hotel today, aimed at impress the Foreign community with the French way of life. One could swim in 54 meters long swimming pool, the city's longest, play cards or snooker and enjoy delicious French food in the restaurant rooms. The place was also famous for its large day-light ballroom, which floor was supported by thousands of small springs and ceiling is still decorated by a 15 meters long piece of stained glass. In the original entrance on Maoming Road, the wonderful mosaic decored wall can be seen today.

This symbol of Chiang Kai Shek regime on th Bund was completed in 1937 by Chinese architect Lu Qianshou. It is a combination of Western Art Deco and typically Chinese shapes, such as the roof one, the "zhong" character inside the windows on the facace or the stylized lions at the gates. Many Chinese designers like Lu Qianshou were actually trained in Amercican architect offices before creating their own vision of Art Deco.

I did not always fancy the Shanghai tendency to copy Art Deco features within modern buildings, also called Fako and The Peninsula on the Bund (2000) was no exception. However, I progressively got used to it and even started to appreciate the interiors of the luxury hotel. The main hall dining room for instance is quite similar to the 1935 French ocean liner "HSS Normandy" and the large wall panels in it could also remind you of the views of the Cercle Sportif Français initial decoration. Zigzag motives are very characteristic too. If you add the exquisite atmosphere of afternoon teas, you can definitely think you back in time at the haydays of Shanghai 1930s. Dating 1934, Park Hotel is inspired by the American Building in New York Manhattan. It is the masterpiece of Hungarian architect Lazlo Hudec. Until the 1990s, it remained the tallest building in Shanghai measuring 84 meters. Using modern techniques of steel skeleton to overtop the nearby race track and the rest of the city, it was a great venue in the 1930s offering a removable roof facility for dancing unders the stars!

This is another Sassoon property, built in 1932 on the model of Fritz Lang's "Metropolis" film (read Vertical village). In order to save time and materials, Palmer and Turner architects decided to use aeroconcrete, a special mix of concrete and ashes, further diminishing the overall weight of the structure. The symetry of the arches and fluid lines of the structure make the crossroad quite impressive as the opposite Metropole Hotel and Commercial Bank of China shapes are rather similar. Hamilton House was composed of offices together with luxurious apartments.

Hudec's sense of esthetics and technical genius can definitely be seen in this 1933 cinema. The trianglar shape of space available to build this cinema made this project a real challenge for the Hungarian architect. He succeded however by combining cubes on different levels and creating an harmonious perspective from the street. Renovation has been completed recently in the building and even better underlined Art Deco details like copper monograms on the ground or wonderfully twisted ballustrades in the staircases! 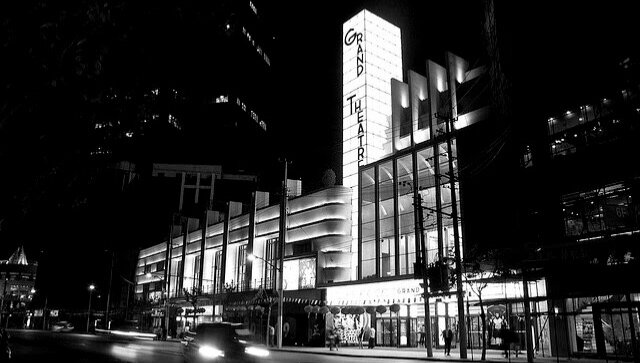 Architects Veysseyre, Leonard and Kruze signed this 1935 building, which pure lines and light yellow color can be seen from former Avenue Joffre, (today's Huaihai Road) at number 1212. Each floor had only three occupants so that each flat got windows on all sides of the building. Unfortunately, the recent "ruinovation" of the original lobby. On the North side however, one can get an idea of the former glory looking at the bright mosaics in the doorways.

At the heart of the Former French Concession, Cathay Theatre was built in 1932 by another Hungarian, C.H. Gonda. Speed lines as well as the roof arrow are distinctive feature of Art Deco. This was the largest cinema of the French Settlement with 1000 seats, showing American comedies and action movies. During the Cultural Revolution era, it was used for propaganda purposes. The 2013 renovation work brings an additionnal Californian touch in the lobby and a connection with the Shanghai Tang clothes shop willing to anchor their image in the roaring 1930s!

Sunrays at the entrance of Astrid Apartments (first photo) situated at the intersection between Nanchang Road and Maoming South Road are definitely inspired by Ancient Egypt. This reference is often used in Art Deco since jewelers were influenced by the 1922 discovery of Tutankhamun tomb in the first place. Then similar shaps were used in architecture design. Egyptian haircuts was another trademark of 1930s fashion! Built in 1932 by Russian origined Levin, Astrid Apartment is the first of the tall Art Deco buildings in the Former French Concession, showing bright yellow and green colors on its facade. However this selection is based of my own taste and perception of most caracteritic Art Deco buildings in Shanghai, I hope it gave you the envy to check it all by yourselves!