The Gin Drinkers Line is one of the most interesting historical places in Hong Kong. Located in the middle of a dense jungle above Shing Mun Reservoir, this complex system of tunnels, pillboxes and trenches is a living memory of the battle of Hong Kong. This place requires a bit of adventure spirit to explore as well as a decent physical condition but it is worth the effort. This defense line was established at the end of the 1930s when the threat from Japan in the region was becoming serious. At that time indeed, the Empire of the Rising Sun had already invaded Shandong in late 1931 and a few months later sent troops to Shanghai to "protect" its citizens from rioters. These events were only the prelude of the Second  Sino-Japanese War in 1937 and the Pacific War in 1941. The geographical ambitions of the military clique which had come to power in Tokyo since 1925 represented a direct threat to the Westerners who controlled the Treaty Ports of China like Shanghai and territories like Hong Kong since the Opium Wars period. Therefore, the decision was made by British military authorities to protect the Kowloon peninsula from a potential attack coming from the North. The existing defenses were indeed positioned against an enemy invasion by sea, dating from the Great Game era when fleets of both German and Russian Empires were active. In Europe as well, the rise of nazism had led France to build the Maginot Line along the German border to deter a potential attack coming from their hereditary foe. This is the same strategy that the British chose to deny enemies access to the Kowloon Peninsula through the road coming from Sha Tin. In total, some thirteen miles of connected tunnels and pillboxes stretched along the Smugglers Ridge with a strategic commanding post in Shing Mun Redoubt. It is interesting to know that most of the mountains in this area were already covered by vegetation at this time, even if the reforestation of Hong Kong accelerated after 1950 to prevent landslides. So the defenders were perfectly hidden on their top positions. This disposal, however, presented a number of weaknesses! First of all, the "Gin Drinkers Line", which name was chosen in reference to the nearby bay and not the preferences of its occupants in terms of alcoholic beverages, soon revealed difficult to man, the military resources of the British Army being already allocated to police tasks in Hong Kong. The fact that pillboxes and observatory bunkers were undermanned from the begining created a flaw in the armour which was rapidly noticed by the Japanese spies who were very active in 1930s Hong Kong. The military command of the Japanese Empire eventually became in possession of the complete map of the Gin Drinkers Line disposal, with full indication of the locations of trenches, pillboxes and covered tunnels. They even had time to build a full scale replica of the defense system, enabling their troops to train for an assault long before the attack actually took place. Then, instead of coding tunnels names, those were given the names of famous London streets, most probably a way to avoid young privates being homesick, but yet another sure mean to garanty that enemies do not get lost! Today, when you stroll along the many galleries of the Gin Drinkers Line, you can still see clear signs with names of Shaftesburry Avenue, Oxford Street or Picadilly on the walls, adding a surreal feeling to the already unusal exploration. You will be amazed to start your visit in so-called Strand Palace Hotel, the headquarters of the defense system, and walk into a virtual London, sometimes crawling in crumbled galleries and sometimes standing at the light of ventilation shafts in better refurbished areas. 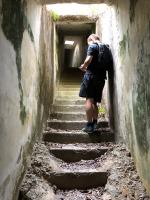 This is precisely because of these shafts that the Shing Mun Redoubt was lost to the Japanese. Developpers had omitted to cover them with a cap, allowing a single platoon of 20 men led by daring Lieutenant Wayabiyashi (photo above and name at the entrance of Charing Cross below) to take control of the bunkers in the early morning of 10th December 1941 by throwing hand grenades through the vacant holes. The group could surcircle the pillboxes at the favor of darkness and make the 43 young recruits of the Royal Scots prisoners, making no casualty that day. It appeared that the British were not in unsufficient number to patrol outside their bunkers or spot the patrol crawling their way up from the reservoir dam! Supposingly designed to hold a few months according to Commander in Chief Brooke-Popham and a few weeks in less optimistic Churchill's views, the whole line collapsed in less than 48 hours! Even if nobody reasonably expected to contain an attack against Hong Kong, but merely save time to stignatise Chinese resistance, the British made the same error as the French one year before. Let us remember that the canons of the Maginot Line all aimed at Germany so that it was easy for the Wehrmacht to conqueer the defenses by getting around them. The visit of the Gin Drinkers Line remains is therefore both instructive and entertaining. If you feel like further emotions, you can pursue on nearby Golden Hill and face the hords of macaque monkeys living there. You will have to walk your way accross some large groups and I advise you hold a stick to deter males attacks (avoid staring at them in the first place).

If you make it in one piece as I thankfully did, you will probably never feel like playing Lara Croft again, this video game suddenly considered a tasteless pastime compared to the thrill of your lattest adventure.